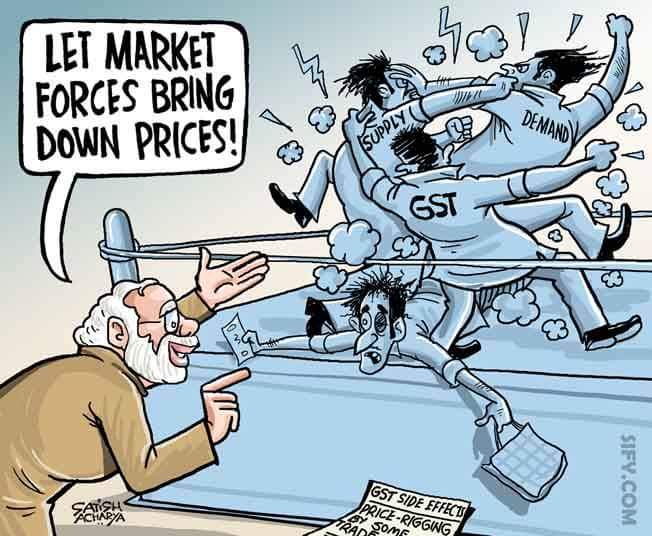 It is introduced as The Constitution Act 2017, following the passage of Constitution 122nd Amendment Bill. The GST is governed by GST Council and its Chairman is Finance Minister of India. A 4-tier GST rate structure of 5%, 12%, 18%, 28% decided, 0-tax rate to apply to 50% of items in CPI basket, including food grains used by common man. Highest tax slab will be applicable to items which are currently taxed at 30-31%. Lower rates for essential items and the highest for luxury and de-merits goods that would also attract an additional cess, was decided by the India’s GST Council on Nov 3, 2016.

First, keep in mind that some good such as a shoe has to first be manufactured before it is consumed. The central government, therefore, levies its indirect tax called central excise at the factory gate. Subsequently, a shoe reaches a retail outlet and is bought by a consumer. The state government, at this stage, levies a tax on consumption dubbed value added tax (VAT). So, we have a tax at the factory gate which adds to the cost of the shoe and another tax on the final price.

Since states have their exclusive domain on consumption tax within their borders, they treat goods coming from other states as “imports.” For example, if a shoe maker in Uttar Pradesh buys leather in Bihar, he would have paid central excise and Bihar’s state taxes on the product. On this cost, UP government would levy its tax if the shoe is sold in the state. If the shoe is sent across Uttar Pradesh’s border and sold in Delhi, an “export” tax called central sales tax is collected by UP. GST was expected anyway, the only catch is which EVM, Marketing and PR focused party brands can be trusted more with public funds, and who must not be.

As the example suggests, India is politically one country, but economically fragmented which is a legacy even beyond our colonial history. There are multiple taxes (लगान or commission) when there is commerce across state borders. Consequently, it increases costs for everyone and makes economic activity within India for Indians complicated, can a GST event change this with same breeds in command? In GST, consumers should benefit in many ways. All taxes will be collected at the point of consumption. It means that if a shoe is taxed at 18%, it will include both central government’s taxes and state government’s taxes. Transparency in taxation should deter governments from indiscriminately increasing taxes as there is bound to be public backlash. Once barriers between states are removed, consumers will not end up paying “tax on tax” which is what happens when goods move across state borders, its not clear how digital goods and services can fit here without profiteering tilted towards big brands only.

GST claims to make tax base comprehensive, as virtually all goods and services will be taxable, with minimum exemptions. GST will be a game changing reform for the Indian economy by creating a common Indian market and reducing the cascading effect of tax on the cost of goods and services. It will impact the tax structure, tax incidence, tax computation, tax payment, compliance, credit utilization and reporting, leading to a complete overhaul of the current indirect tax system. GST will have a far-reaching impact on almost all the aspects of the business operations in the country, for instance, pricing of products and services, supply chain optimization, IT, accounting, and tax compliance systems.

GST is envisaged as neutral in its application and attractive. The advantages of GST are:

GST would replace most indirect taxes currently in place such as:

The key IIM MBA-style Mobile imperatives are:
Understand key areas of impact in their business
Prepare different scenarios for the design and application of GST
Continually track policy development regarding GST and update prepared scenarios
Identify any areas of adverse impact and prepare contingency measures
Identify issues and concerns requiring representation to authorities and develop a strategy for effective advocacy

More info and registration at https://gst.gov.in

The Impact of Geometry in Digital Design

Digital Marketing Agency based in Kolkata