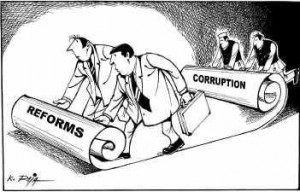 N R Narayana Murthy has bemoaned that elite are going unpunished though they commit huge crimes in the country and saw it as problem with this society. When his reaction was sought on large-scale white-collar crimes taking place in the country the Chief Mentor of Infosys Technologies Ltd said there should be quick investigation based on data and facts and the media should not play it up.

And there should be very heavy punishment which is commensurate with the benefit that those people have indeed gained. If you have quick commensurate punishment then things will be alright. Today we have so many cases where elite…they just don’t get punished even though they have committed huge crimes. That’s the problem with this society, he said.

He made the comments responding to questions from the media after a panel discussion on entrepreneurship and social change organised by the Hyderabad-based Indian School of Business (ISB) on entering its 10th year at Infosys campus here last night. Murthy did not discuss specifics but his remarks come at a time when corruption issues continue to dominate the country’s political landscape. He emphasized the need for all businesses to enforce code of ethics.

Whether there are scams or not its extremely important to run your business legally and ethically. That’s the only way to run the business. It has to be done like that. There is no other way Murthy said. He said its absolutely mandatory to follow code of ethics because that’s the only way. Its like saying: should I follow the rules of the road when I am driving. Its good for you good for others for everybody.

Political Volleyball with transparent people – public or private is no bar