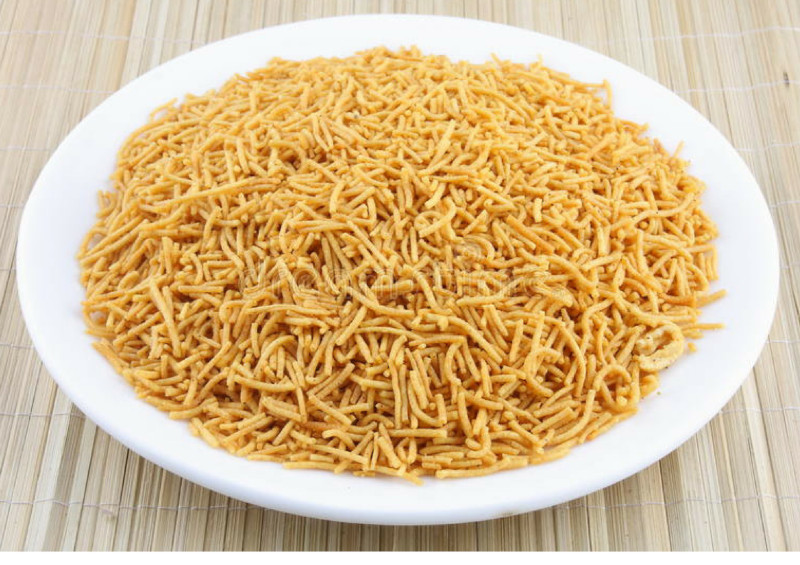 Method: Take a plate and spread paper napkin in it. After frying the aloo bhujia place it on the paper napkin to soak excess oil.

Heat a pan and add sufficient oil to deep fry the aloo bhujia. While the oil is getting hot prepare the dough.

Take a mixing bowl and add gram flour, turmeric powder, salt, asafoetida and freshly ground spice powder. Mix all well with fingers and add grated potatoes. Mix well to form dough. No need to add any amount of water as the moisture in boiled potatoes would be sufficient to make the dough. Scrape the sticky mixture in between using a plate or a spoon or ladle and make the dough.

Use any sev press or sev maker and make aloo bhujia. Wet palm with water and take a portion of the dough and form into cylindrical shape. Fill the dough into the cylindrical mould and close the lid. When the oil is hot enough start making aloo bhujia. Hold the mould in left hand and press the dough with right hand into the oil.

While pressing the dough, turn left hand so that the sev takes a spiral shape. Fry the aloo bhujia on medium flame till one side

is slightly crisp. Then turn with a ladle and fry on high flame till the other side turns crisp. Remove the fried aloo bhujia from oil using a slotted ladle and place it on the paper napkin to soak excess oil. Repeat the process of pressing the sev in hot oil and frying it till all the dough is used up. Cool the aloo bhujia to room temperature to become extra crisp. Take the spiral aloo bhujia into a bowl and crush slightly. Store this tasty aloo bhujia in air tight containers and serve them as a snack.

passes through the holes of the colander and cooks the potatoes. This way the potatoes absorb less water and hence hold the shape. We steam cook to have firm yet fully cooked potatoes. If we place the potatoes without adding water in a bowl and pressure cook then the potatoes would not get fully and evenly cooked. So use a colander, to cook the potatoes under steam.

Grate the potatoes before adding to the dry ingredients—this avoids any lumps of boiled potatoes. When we press the sev in hot oil the mixture should be smooth to pass through the holes—so it is advisable to grate the potatoes for smooth texture.

Take care while holding the sev press above oil. Wipe palms and make sure palms are not oily or wet to avoid dangers while pressing sev in oil.

First fry on medium heat till one side is slightly crisp. Then turn the sev and fry on high heat as by this time the heat would not be sufficient to fry the aloo bhujia well. Maintain the heat by increasing and decreasing the flame to get the right heat while frying. If heat is high the sev gets dark color fast yet it would not be fried well inside. If heat is low the sev absorbs oil as it contains potatoes. So it is very important to have the right heat

while frying aloo bhujia. When the bubbles start reducing it indicates that the aloo bhujia is crisp. Remove the fried aloo bhujia at this stage as the heat inside it would cook for a while and makes it further crisper. Do not fry till the sev turns brown in color as it gets cooked further after removing from oil and turns into dark brown. Cool to room temperature before storing.

Serve this tasty aloo bhujia as a snack or as an accompaniment with chat.

One thought on “Revealing Secret Recipe of Tasty Aloo Bhujia”

Is it safe to resume anyone, at anytime, from anywhere using android apps?