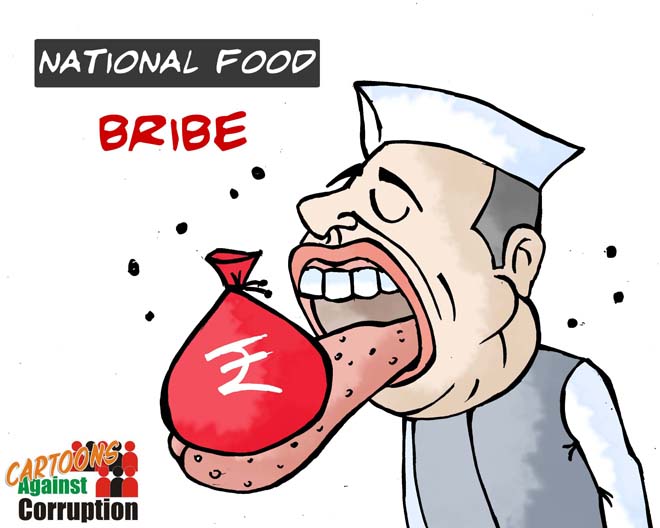 Arms contracts and middlemen. Kickbacks and murky deals. While for a cleaner society, there should be no role for such people when military contracts are being negotiated and signed, another influential group (obviously the beneficiaries) are asserting their intelligence in selecting arms and equipment for bribes, commissions and cuts running into crores of public money.

Alleged kickbacks and role of middlemen are widespread in multi-crore deals with foreign firms. Some rich and sick minded corrupt will always believe that bribes are a necessary part of doing business globally or even locally. How will they grab contracts and become over-rich otherwise?

In one multi-crore helicopter alone, bribes amounting to 51 million euros were paid and fictitious orders were raised through IT companies in Chandigarh. Junk helicopters were bought in order to mask the money trail. Middleman Haschke admitted that he had met former Indian Air Force chief SP Tyagi six-seven times and that Tyagi’s three cousins were instrumental in swinging the deal.

What is surprising is that despite putting such premium on honesty and integrity, information about impropriety in the AgustaWestland deal was in the air for a long time, but unfortunately, nothing was done. What the defence minister has done now, he should have done at least a year ago. The way it was going, you have to thank god for elections in Italy and the arrest of the Italian CEO, otherwise there would have been no action on the Indian front. Not even the pretence of a probe.

As per Supreme Court advocate Prashant Bhushan: There are so many people mentioned in the Italian report who are sitting in India. All the Aeromatrix directors, for instance, are here in India. Why are they not being interrogated?” Chandigarh-based Aeromatrix has emerged as the front company that Haschke and Gerosa used for their dubious deals.

The bribe factor is established. The transaction has been traced. Quantum is determined. The bribe givers have been arrested. The methodology of the bribery is also known. The only missing link is India’s refusal to track the beneficiaries. Lost lives of of sailors, soldiers, officers and above all innocent civilians are just collateral damages to keep the deal sweeter for elite looters.

Keep track of http://en.wikipedia.org/wiki/List_of_scandals_in_India (What we know may only be the tip of the iceberg!)