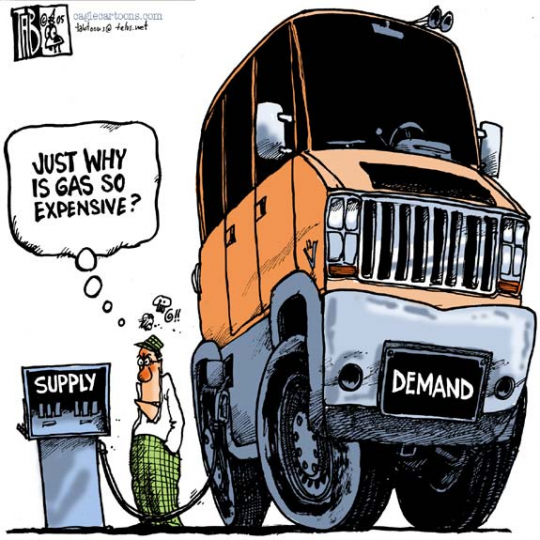 Feb 4, 2015: Global oil prices had fallen sharply over the past 7-8 months, leading to significant revenue shortfalls in many energy exporting nations, while consumers in many importing countries are likely to have to pay less. India imports 75% of its oil, and analysts say falling oil prices will ease its current account deficit. At the same time, the cost of India’s fuel subsidies could fall by $2.5bn this year – but only if oil prices stay low and an election every quarter!

Fundamentally, was $130 a barrel the “right” price or is $50 the right one? What drove the price to 100+ in the first place? Clearly the stronger dollar has reduced the price per barrel, just as clearly, there has to be a role played by speculation that drives the price up and then down with very little real facts to justify? High price attracts investment. It takes time to build infrastructure from that. When the infrastructure is in place, supply increases. Then, supply drives down price. The only time price is “right” is the moment the trade takes place. It is not right the moment before or after. Shut-up, unless a member of some cozy club of cronies or worshiping those, you are a global threat and may not appreciate complexities in international pricing! Ask a question and answer yourself adamantly without even a pinch of evidence. Why oil price is falling? The answer is simple and short: because stupid, corrupt and immoral terrorists lead most of:

It’s the same reason we are doomed to get extinct as a species. We are suicidal and let smart terrorists get in the above listed positions of power. I am no egg head economist but I can do simple math. Oil prices are collapsing because the US & Allies are driving them down to put Russia out of business as it prevented an invasion of Syria and its stance in Ukraine, which depends mostly on oil revenue, and have a huge language-barrier, English haters. The dramatic free fall also have other noble goals like cheering domestic crowds for upcoming elections in big daddy’s democracy, teaching lessons to Iran, Iraq, ISIS and other enemies who rely on oil heavily.

Economists argue that demand is low because of weak economic activity, increased efficiency, and a growing switch away from oil to other fuels. Second, turmoil in Iraq and Libya – two big oil producers with nearly 4 million barrels a day combined – has not affected their output. The market is more sanguine about geopolitical risk. Thirdly, America has become the world’s largest oil producer. Though it does not export crude oil, it now imports much less, creating a lot of spare supply.

Finally, the Saudis and their Gulf allies have decided not to sacrifice their own market share to restore the price. They could curb production sharply, as advised by masters in US, but the main benefits would go to countries they detest such as Iran and Russia. Alibabas of Saudi Arabia can tolerate lower oil prices quite easily with $900 billion in reserves. Its own oil costs very little (around $5-6 per barrel) to get out of the ground. Ultimately, a win-win for English media saviors.

One thought on “Oil price speculation: Winners and Losers”

Inequality increasing thanks to corruption – morons bow to talent of Nazi cronies!