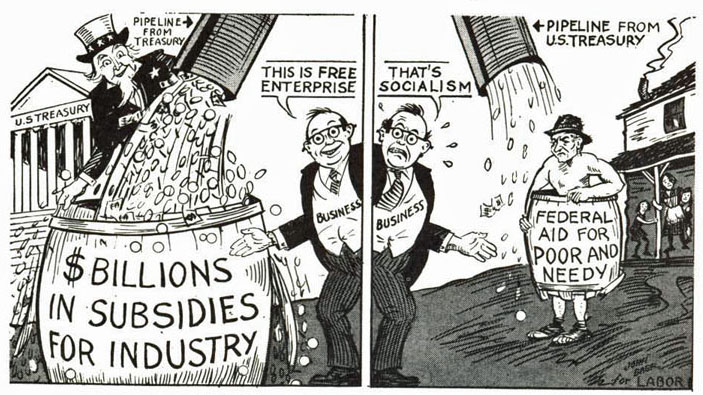 Top agenda of today’s branded governments is to invade as much areas possible & just annex anything / everything on the way for its developing empire, made for entertainment of its funding cronies. Bill the Govt treasury and suck millions of public money for a few thousand bucks job, while their real cost of delivery is petty considering sucked workers, pay some taxes for record show-off. What a HNW success, buy media and spread viral just like other ideas of such great looting forces cum gurus. This is how cronies of star tech giants creep into rich lists, contribute towards development and offer 6-7 figure salaries (indirect bribe) to high-fly campuses with fanfare, the real brains sticking to ethics are not part of all those hyped cozy gymkhana network of loot-wing progressives, selfish nihilists, 1% terrorists, narcissistic dopes turned philanthropists; while tactically pushing, branding or labeling common sucked citizens somehow, who both logically & ideally cannot prefer to be seen as its partner / tolerate the looters!

Unless you support, EVM vote or worship ideas advertised by big gangs raping “ideal capitalism” and its close family of G20 (representing Gandu20 cronies) beneficiaries – the new mantra is you are anti-national loser and must be distinctly defined somehow and contained by hook or crook. See how nationalism becomes more equal to blind follower of a set of Victorian type monarchs and thug emperors, we have not democratically voted them to serve, but instead we’ve signed up for being ruled, looted and governed by all means in partnership with thee upcoming smartest tech breeds, packaging and selling अफवाह to shoot themselves millions of miles into deep space, while they’ll simply self-destruct midway along with all of this planet’s resources for its own luxurious death event greed.

Difference between right and wrong is for the so-called losers to ponder or even get wiped up or assassinated for sticking to such outdated causes. Nevertheless, be a proud loser martyr rather than part of the corrupt assholes gang. An unpleasant surprise for cronies: Most smart losers also knows all the success jugaad mantras, but do not adamantly compromise their rightful value systems for more bucks or fame unless the universe is exploding next week.

Cronies deliberately deprive young buddies from real story titles – Learn to say “NO” – a powerful vedic wisdom ignored by many!  Or chant long live the looter – #JaiJugaad – We the commoners must be brainwashed with rosy sensational stories and smart terrorism. One of these chow meow anonymously promoted story scripts we stumbled, apparently becoming integral part of cronies soap opera telebrand type of propaganda storytelling (before / after), dramatic rocket science.

A young man went to apply for a managerial position in a big company.

He passed the initial interview, and now would meet the director for the final interview.
The director discovered from his CV that the youth’s academic achievements were excellent.

He asked, “Did you obtain any scholarships in school?”
The youth answered “No”.
“Was it your father who paid for your school fees?”

“My father passed away when I was one year old, it was my mother who paid for my school fees.” he replied.

“Where did your mother work?”

“My mother worked as a clothes cleaner.”

The director requested the youth to show his hands.
The youth showed a pair of hands that were smooth and perfect.

“Have you ever helped your mother wash the clothes before?”
“Never, my mother always wanted me to study and read more books. Besides, my mother can wash clothes faster than me.

The director said, “I have a request. When you go home today, go and clean your mother’s hands, and then see me tomorrow morning.”

The youth felt that his chance of landing the job was high. When he went back home, he asked his mother to let him clean her hands. His mother felt strange, happy but with mixed feelings, she showed her hands to her son.

The youth cleaned his mother’s hands slowly. His tears fell as he did that. It was the first time he noticed that his mother’s hands were so wrinkled, and there were so many bruises in her hands. Some bruises were so painful that his mother winced when he touched it. This was the first time the youth realized that it was this pair of hands that washed the clothes every day to enable him to pay the school fees. The bruises in the mother’s hands were the price that the mother had to pay for his education, his school activities and his future.

After cleaning his mother hands, the youth quietly washed all the remaining clothes for his mother. That night, mother and son talked for a very long time.

Next morning, the youth went to the director’s office.

The Director noticed the tears in the youth’s eyes, when he asked: “Can you tell me what have you done and learned yesterday in your house?”

The youth answered,” I cleaned my mother’s hand, and also finished cleaning all the remaining clothes’ “I know now what appreciation is. Without my mother, I would not be who I am today. By helping my mother, only now do I realize how difficult and tough it is to get something done on your own. And I have come to appreciate the importance and value of helping one’s family.”

The director said, “This is what I am looking for in a manager. I want to recruit a person who can appreciate the help of others, a person who knows the sufferings of others to get things done, and a person who would not put money as his only goal in life.”

This young person worked very hard, and received the respect of his subordinates. Every employee worked diligently and worked as a team. The company’s performance improved tremendously.. see that? Of course not at all storytelling by a bhakt of those merciful cronies. See the happy ending, line-up and sign-up for chor bhakts blindly! If your parents gets success in such twisted bhaktoist way, they do not necessirily need to teach any moral lessons to its zombie offspring, just jugaad a lot more and enter any empire’s courtyard with thumping majority, greed is Queen’s ancient trade secret! “Chapter 0 of King’s Bang Theory”

Coming to financial trumoils in South Asia, origins of this mess are many decades old when the public banks controlling 80% of system’s assets were state-run, lent too freely to infrastructure and industrial projects, mostly the ones backed by politically-connected cronies and socialist aristocrats. Today, we see the continuation with their GenXYZ replicas staring at smart dashboard driven boom-and-bust stats in the lightly regulated shadow private banks, which controls the remaining system, flying high in tech clouds & jargon. These are mixed economies, cannot blame the academic principles of pure capitalism or pure socialism, when countries are mostly ruled by idiots incapable of understanding, forget practicing either ways of lifestyle with any perfection whatsoever.